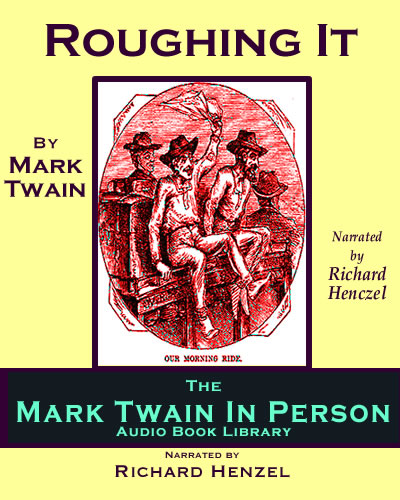 Mark Twain dedicated this book "to Calvin H. Higbie, Of California, an Honest Man, a Genial Comrade, and a Steadfast Friend. This Book Is Inscribed By the Author, In Memory of the Curious Time When We Two Were Millionaires For Ten Days."

Thus Mark Twain reveals the climax of the first half of his story in the first two sentences, as is his wont: obviously, the author and his comrade will become millionaires, but evidently their good fortune won't even last a fortnight. But not to worry, there are adventures galore on the way to that final episode in the mining camps of northern California, as young Sam Clemens sets off on the Overland Stage line, recording the fauna, flora, and humanity of The Wild West. He experiences condemned army bacon, "slumgullion," and Mormon "Valley Tan." He buys a genuine Mexican plug. He hazards death from freezing in a blizzard, drowning in a desert, dissolving in an alkali lake, and roasting in a forest fire. He meets cowboys, Indians, outlaws, and even a Mormon Avenging Angel or two. And of course there are the strange events that lead to those ten days of prosperity. Also, during this "seven month" trip that lasted seven years, he discovers a new trade as a reporter, and as a journalist is sent to Hawaii where he admires the native girls, dips poi, and follows an overconfident tourist off the trail and into the red smoky crater of the Kilawea Volcano. Then, in an even bolder move, takes to the stage as a lecturer in San Fransisco.

A vivid and entertaining account of this brilliant writer's journey through this fascinating era of American history, characterized by marked extremes of lawlessness, heroism, cowardice, greed, hope, and desperation. With of rough characters, stunning landscapes, and close encounters with Indians,

Listen to a sample HERE... Cover art for the mp3 CD version of this book.

Also available from the nice people at

RETURN to The Mark Twain In Person Audiobook Library

ALL RIGHTS RESERVED, INCLUDING REPRODUCTION, DUPLICATION, OR BROADCAST IN ANY FORM